When a sports team, league or media outlet makes a viral post on social media, the employees working to create that piece of content often remain anonymous behind their employer’s brand. Jared Kleinstein, the founder and CEO of creative production company Fresh Tape Media, is looking to give credit where credit is due to internet content creators through his new app called Gondola.

Denver-based Fresh Tape Media has produced content for leagues such as the NBA, MLB, MLS and PGA Tour, as well as brands such as Twitter, Meta, EA Sports, Microsoft and Turner Sports. Kleinstein, who worked as the head of sports at Wayne from 2014 to 2016, says the standard practice for documenting what team members worked on specific projects was to record the data and content in a Google Sheet until he hatched the concept of Gondola. While working with an old Vine associate at Fresh Tape Media.

“I had one of our old wine engineers build a very basic database system. We put in a social link, and it would spit out social data to the public,” says Kleinstein, “and we used it ourselves for a year, not telling anyone. From that. Like a year later, we said, let’s add who from our team worked on the project. We had an epiphany a few months later, which was if you could see the link from Instagram, Twitter or YouTube and find out who Made this piece of content, then we accidentally made IMDb for social media. If everyone uses it, we can build the first credit system for the social internet.

Gondola’s website spun off Fresh Tape Media last fall and its first iOS mobile app launched last week. Gondola now has a crowd-sourced community of more than 5,000 content creators who have credited approximately 18,000 accounts over 200,000 social posts on the platform, meaning users are not only tagging themselves in the work they’ve made but also their colleagues. Graphic designers, social media managers, videographers, photographers and editors are among those who use Gondola. 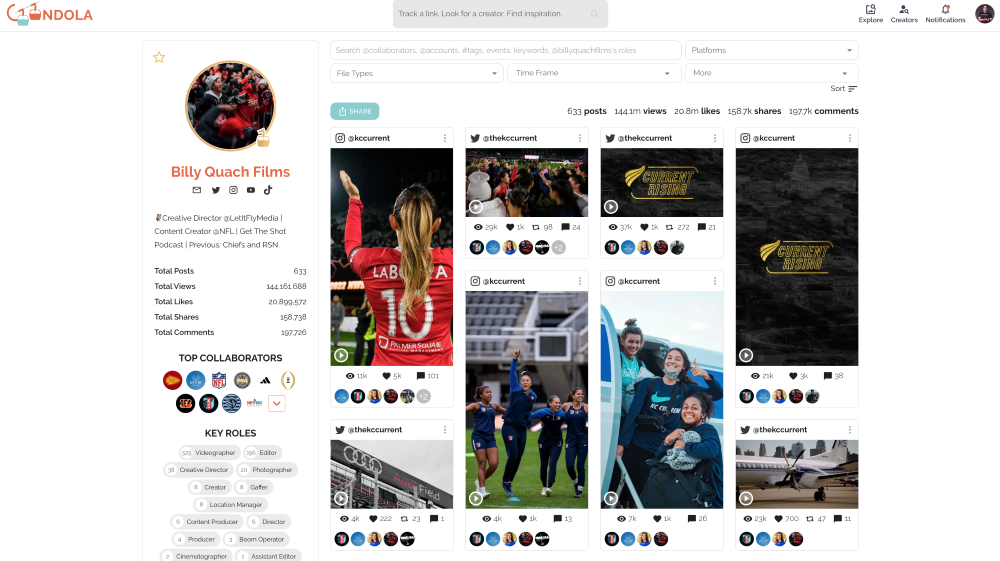 Gondola users can use their digital portfolio to keep track of all their content for brands across multiple platforms.

“We recognize the value of brand attribution to the whole team involved, which is the ethos of the name Gondola – you can take it on your own, but it’s much more fun with the group,” says Kleinstein. “Many major leagues have mandated the use of Gondola for their creative teams. All major sports teams in the US are represented and have their content credited by their creators. It’s a product for the entire creative community. But the sports world drove [Gondola]Which is a testament to how the creative sports community is pretty tight knit.

The startup has so far been bootstrapped by Kleinstein, but he intends to raise a seed round in the next couple of months. Gondola’s app also has image recognition technology to validate the history of articles and identify original versus copied content. Nick Cicero, VP of streaming analytics company Conviva, also served as an advisor to Gondola.

“Gondola uses image recognition technology to scan visual elements of the post,” says Cicero. “The user can insert the credit they want, and Gondola adds its own kind of data based on the recognition of the image. So there are integrations with the different APIs of the social networks, and also some proprietary tech Gondola has built to identify The context of this post.

Creators on Gondola can connect content by locations, event keywords, and specific keywords. “There’s no better tool than Gondola to showcase your work since I’ve been in the social media industry and having an iOS app makes it that much better,” Neil Tenant, the NHL’s creative marketing manager, said in a statement. “Goodbye bookmarks, unorganized documents full of links and trying to track down that one Unreal video I made but I don’t remember when it came out.”

Multiple major leagues have mandated the use of gondolas for their pitching teams. All major sports teams in the U.S. it. are represented and have their content credited by their creators. It is a product for the entire creative community. But the sports world drove [Gondola]Which is a testament to how the sports creative community is pretty tight knit.

Gondola’s platform can also be used by hiring managers to identify talent. Search for talent can be filtered by location, job type and specific roles, such as finding photographers who have worked for the NBA All Star Game or photographers who have worked in the NCAA. Upcoming features include a job board that will showcase a creator’s projects when they apply for a job.

Also Read :  Morocco starting in a 5-4-1 system cost them their shot at the World Cup final

“If you’re applying for the NBA to be a graphic designer,” says Kleinstein. “In the past, you’d be like, here’s my portfolio, and here’s my resume. With [Gondola] We can say, give us three examples of basketball graphics that you’ve done. And instead of someone trying to comb through their entire Google Drive and their portfolio, they just do a quick filter in their Gondola profile, click on a few posts, and hit send. When people think about what creatives share when looking for new jobs, their LinkedIn or their resume is not a good indication of what kind of creative they are. And their gondola profile is.

Nvidia teams up with Rescale to simplify cloud-based AI projects